This coil of feather money was used for a very long time on the Santa Cruz archipelago, a remote group forming part of the Solomon Islands. Feather money was used not only for large payments but also for ritual payments. For instance, it served as a dowry for a wedding. As a form of compensation for the loss of their daughter, the bride’s family received several feather coils. Production of one of these coils relied on ancestral knowledge that was handed down from generation to generation. This coil is made up of an assembly of red feathers taken from the scarlet honeyeater or cardinal myzomela. This work involved at least three people. The bird catcher caught the birds. A second specialist was responsible for gluing the feathers together. Finally, a binder bound all the banes together by rolling them up in string. Just to make one single coil required at least 50,000 feathers, the equivalent of between 400 and 600 birds and 700 hours of work. A documentary illustrating these production techniques can be watched in the Museum. At the beginning of the 20th century, feather money was replaced by coins and banknotes. However, the coils continued to circulate alongside them at ceremonies up to the 1990s.

This coil of bird feathers is a rather surprising means of payment. This feather money was long used on the Santa Cruz archipelago, a remote group of islands forming part of the Solomon Islands. This archipelago comprises the islands of Ndende, Vanikoro, Utupua, Tinakula and several reef islands.

The feather money consisted of a 9-metre-long strip of plant fibres covered with the red feathers of the small scarlet honeyeater (Myzomela Cardinalis). It often took the form of a double coil. One double coil was a trading unit which could not be sub-divided and consisted of around 50,000 to 60,000 red feathers. Exactly where the idea of feather money came from is unclear, but the red colour certainly points to a Polynesian influence. Colour of the gods, but red rarely appears in nature. 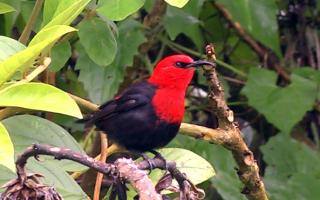 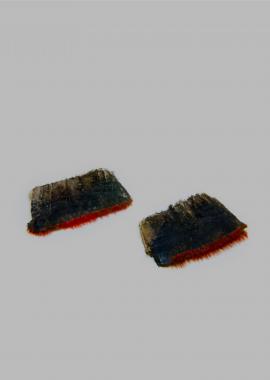 Feather strips which, put together, form coils © Museum of the National Bank of Belgium

Production of the feather money was largely confined to the south-west part of the main island of Ndende and was a three-stage process. Each stage was carried out by a specialist who had received the magic skills from the spirits. The technique was passed on from father to son. In the first stage, the scarlet honeyeaters were caught by a bird catcher. To do this, he painted a branch with mulberry tree sap, which served as glue. He then lured the birds by using a real tethered bird, setting up a decoy bird or imitating the creature’s call. Once the bird was stuck in the glue its feathers were plucked.

A second specialist was responsible for making the platelets (called lendu) composing the coils. Stiff pigeon feathers were used as the foundation. The pigeons were first shot down with a bow and arrow. The feathers were then glued together with the sap of the mulberry tree. The red feathers of the scarlet honeyeater were then attached to each platelet. Altogether, 1,500 to 1,800 of these platelets were used for just one coil.

Finally, the platelets were taken to the coil-maker. He then bound them all together to form a nine- metre-long coil. This involved stretching two strips of bark parallel to one another between two trees. They were held apart by a horizontal stick made from the wing bone of a flying fox. The specialist then began binding the platelets between these two cords, working from the centre towards the outer edges. The platelets overlapped like roof tiles. Altogether, it took 700 hours of work to make one coil, almost a whole year.

The end result was a bright red coil of feathers. The brighter the colour and the better the condition of the coil, the greater the value. Altogether, there were ten grades of feather money. The highest- grade coils had the brightest colour and were therefore more precious. The lowest-grade coils were almost entirely black and were often in poor condition. A coil in a particular grade was worth twice as much as one in the next grade down. For storage purposes, the coils were packed in leaves and cloths together with amulets and hung about two metres above the fireplace. If they were kept dry, they suffered less damage from fungus and insects. 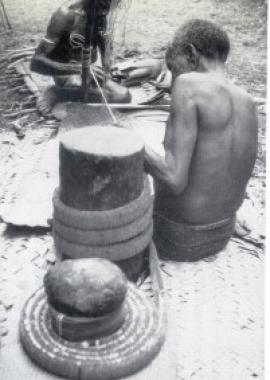 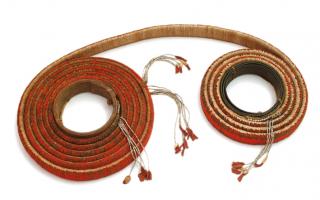 Feather coil © Museum of the National Bank of Belgium

When considering traditional money, we have to set aside our Western definition of money. The various forms of money, such as feather money, shells or stones, were used not only for trade but also for ritual payments such as fines and compensation. Feather money was also used, rather surprisingly, for the payment of a dowry. A dowry was a transfer of goods and services from the bridegroom’s family to that of the bride. This was because when a daughter married, that meant a loss for her family, not only in the emotional sense, but also in terms of labour. The bride’s family generally received ten feather coils, although in the Western islands the number of coils could be higher. The women there were particularly skilled: they were good at fishing, paddling canoes and climbing fruit trees.

Feather money was also used in everyday transactions. An entire trading network grew up between the various islands in the archipelago, where payments in feather money took place alongside barter trade. The small reef islands were unsuitable for agriculture owing to their sandy, infertile soil, but they had a large population which lived mainly by fishing and pig farming. In contrast, Ndende was a large but sparsely populated island with fertile soil. The people of the reef islands therefore often exported women to Ndende, in return for feather money. This was often used to buy timber, boats or pigs.

Nowadays, feather money has largely fallen into disuse. Since the beginning of the 20th century, and certainly since the Second World War, Western coins and banknotes have been used for payments in the Santa Cruz archipelago. The last man with the skill to make the coils of feather money died in the 1980s. It is thanks to the documentary of the German anthropologist Gerd Koch (1922–2005) that these production techniques are still known to us. Some examples can still be found among collectors and museums. The rest of the surviving coils are often damaged or in a poor condition. Many of the feather coils were thrown into the sea by the people of the archipelago. 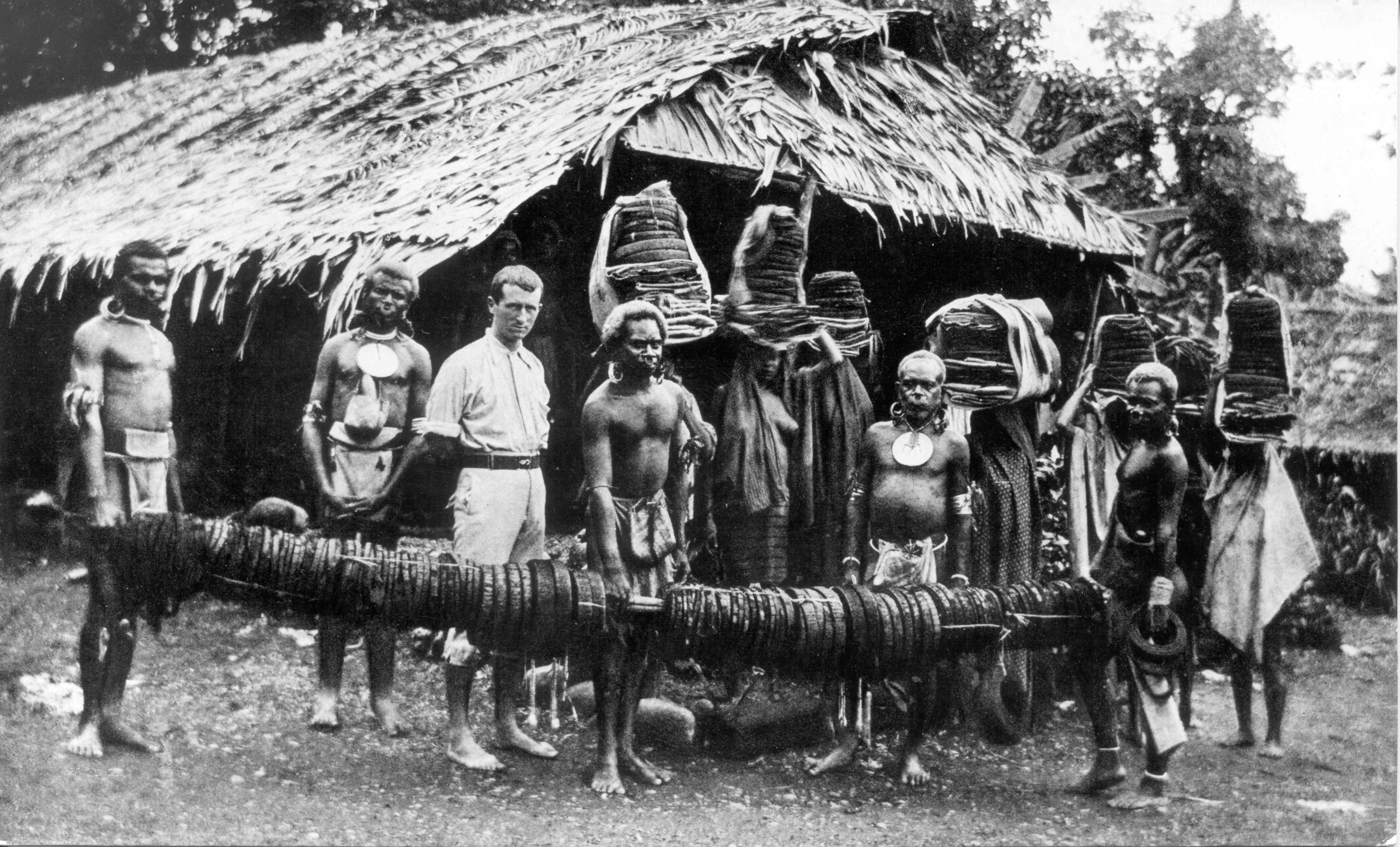 Lautz T., “Traditional Money and Cultural Diversity: Continuity and Change in the Pacific Region”, in Lane P. & Sharples J. (ed.), Proceedings of the ICOMON meetings, held in conjunction with the ICOM Conference, Melbourne, 2000.