Around 500 BC, a completely new coin made its appearance in Athens: the tetradrachm, featuring the head of the goddess Athena on the obverse and the depiction of an owl and an olive branch on the reverse. As the owl is a nocturnal creature that can see things others don't, it was used to symbolise wisdom. This is why the Greek goddess of wisdom, Athena, was accompanied by an owl. The tetradrachma is not only evidence of the great aesthetic sense of the Greeks, but also of the major role that the cash economy had come to play in their daily lives. The owl and the olive branch constitute the link between the tetradrachma and the Greek one-euro coin. The tetradrachma was the first “international” coin, used throughout Europe. The Greek one-euro coin therefore illustrates the desire for unity, the very essence of the euro area, the European Union and of European thought.

When holding a Greek one-euro coin and examining the obverse, you will perhaps not easily realise that, back in 500 BC, there were already coins in circulation with a similar illustration. The depiction of the owl and the olive branch is a secular illustration that decorated the Athenean drachma in Ancient Greece – as well as the sub-divisions and multiples of this silver coin – and one which still features on the one-euro coin today. In the showcases on the first floor, you will not only be able to admire two magnificent Athenian tetradrachmas from the 5th century BC (one tetradrachma is worth four drachma), but also another Greek coin depicting the owl.

By featuring the owl and the olive branch on the national side of their one-euro coins, the Greeks are highlighting their rich past. This does not just refer to the historic importance of the City of Athens, but it also reminds us that it was in fact in Greece that the first European coins were minted. 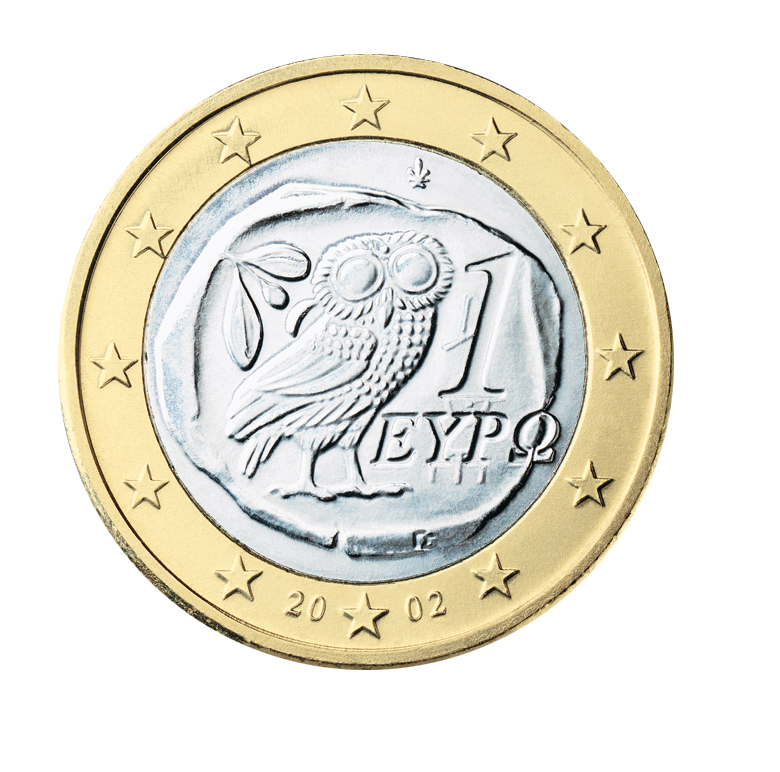 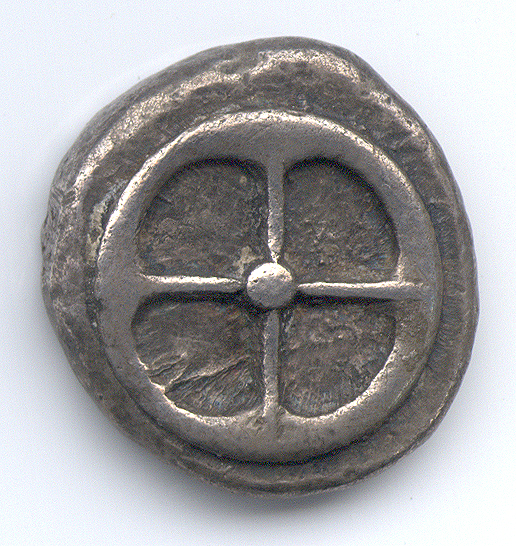 Athenian didrachma dating from around 540 B.C. © Museum of the National Bank of Belgium

Let us now take a look at the historical context in which the Athenian tetradrachma emerged. It was back in the 7th and 6th centuries BC and along the west coast of Asia Minor that the oldest coins of the Western world are believed to have been minted. Shortly afterwards, the use of coins as a means of payment spread to mainland Greece. The first coins were struck in central Greece (Aegina, Athens, Corinth), in northern Greece (in the Macedonian coastal cities of Acanthus, Mende and Potidaea) as well as on the island of Siphnos.

The oldest Athenian coins were the didrachmas, which were minted about 560-550 BC. These silver coins had a large variety of depictions that one used to think were related to the coats of arms of the Athenian nobility. However, the origin of these coins is subject to controversy: it has not been proved that they were issued by the Athenian city or by different noble families. Circulation of these coins always remained limited to the region.

About 500 BC, a completely new coin made its appearance in Athens: the tetradrachm, bearing the portrait of the goddess Athena on the obverse and depicting an owl on the reverse. Over the centuries, this type of coin gradually became an “international” means of payment in the whole Mediterranean basin.

The series of Athenian coins comprised no less than fifteen, and later sixteen, different denominations, ranging from the decadrachm (worth 10 drachmas) to the tiny hemitetartemorion, (with a value of one-eighth of an obol, a drachma being worth six obols). The tetradrachma was the most widely-used denomination.

Because the (tetra)drachma was used throughout the Mediterranean basin, unlike the first the Athenian coins or coins from other Greek cities, it is living proof of the commercial power and political prestige of the city of Athens. It is not only evidence of the aesthetic sense of the Greeks, but also of the major role that the cash economy had come to play in their daily lives. 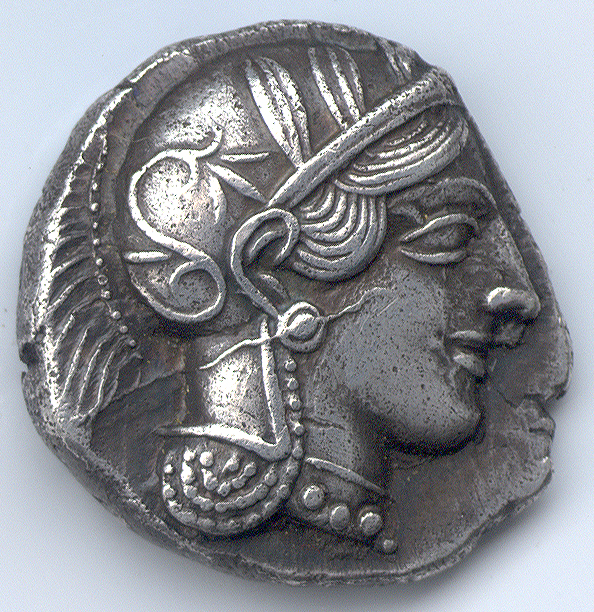 Obverse of an Athenian tetradrachma dating from around 450 B.C. © Museum of the National Bank of Belgium 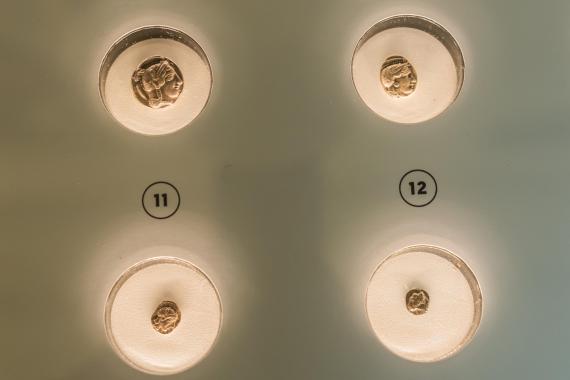 Let us have a closer look now at the significance and symbolic meaning of the depiction of the owl and the olive branch as well as the reasons why they are connected with the goddess Athena.

An olive branch is shown in the top left-hand corner. In ancient times, the olive branch was also associated with the goddess Athena. Athena is said to have planted an olive branch on the Acropolis during her contest with Poseidon, the sea god, for the sovereignty of Attica. The fact that idols were carved out of the olive tree’s wood is proof that the olive branch quickly took on a sacred meaning. The sacred wood of Olympia was also an olive grove from which branches were given to the winners of the Games. Likewise, the winners were not only crowned with laurel wreaths, but also given crowns woven from olive leaves on different occasions.

To the right of the owl, one could read the first three Greek letters of the word Athens. On the one euro coin, they have been replaced by an indication of its face value. Although the reference to Athens has disappeared in favour of Europe, the link between two coins of historic importance: the 5th century BC tetradrachm and the euro of today.

With its rich history, the Athenian (tetra)drachma has thus been clad in new European clothing, in other words, a sort of tribute. It was the first international coin to be used on the European continent and thus illustrates the desire for unity, the very essence of the euro area, the European Union and of European thought. Consequently, the Greek euro coin tends to remind us that we have a tangible piece of European (monetary) history in our hands. 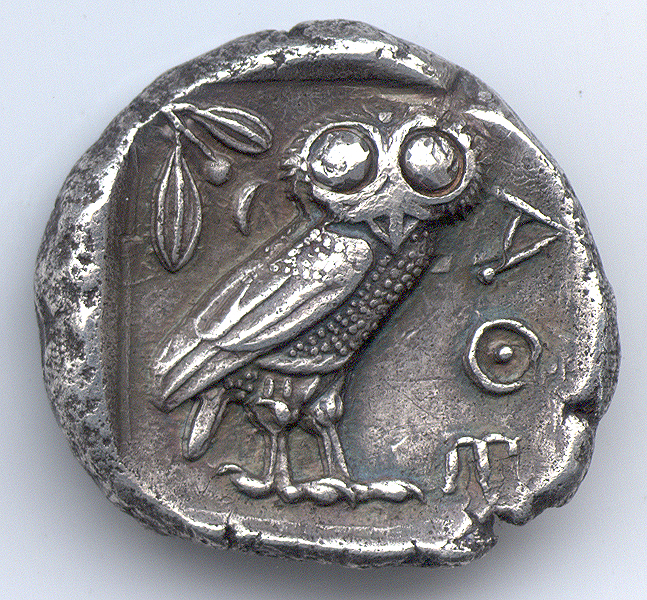 Reverse of an Athenian tetradrachma dating from around 450 B.C. © Museum of the National Bank of Belgium