This impressive stone was a common means of payment used on the island of Yap in Micronesia. Paying with stones that weighed up to 6 tonnes might not seem very convenient to us but was not a problem for the island’s inhabitants. In fact, the largest stones are not destined to be moved. When transactions take place, these stones change owner without changing their location. Just like our current monetary system, this system is based on confidence.

Each stone is unique, but they are all cut to a round shape with a hole in the centre to make them easier to move. The material used is aragonite, a mineral not found on the island of Yap but on the island of Palau (400 kilometres away). The value of the stones depends on various characteristics such as their size, history, and beauty.

However strange it may seem, the stone disc that is in the Museum is still used as a perfectly valid means of payment on the island of Yap, somewhere in Micronesia, in the middle of the Pacific Ocean. Tourists who visit the island are often astonished that the people of Yap just leave their “money” lying in the streets. Especially when it is not just small change! The largest stones have a diameter of 4 metres and can weigh up to 6 tonnes. But where lies the origin of this special kind of money?

Several centuries ago, some inhabitants of Yap sailed to the neighbouring island of Palau, about… 400 kilometres away and there they discovered a rather special rock: aragonite.

As this stone was not known on the island of Yap, they set about extracting massive pieces of it in the caves on Palau. They cut them into the form of discs with a hole pierced in their centre to put a stick into them, which made it possible to manoeuvre them using the same principle as the wheel. They then had to transport them back to the island of Yap with the help of bamboo rafts pulled by a canoe. After a while, the inhabitants of Yap came to use these discs as a means of payment and the stones were given the name rai.

However, the boat trip to Palau back then was strewn with obstacles. Many people got injured or even lost their lives on the way. Considering the risks incurred and in view of the number of victims, the value of these stones was actually increasing. Because of the danger the journey by boat involved and the scarcity of the raw material (aragonite), these stones became a very valuable commodity in the eyes of the people of Yap. 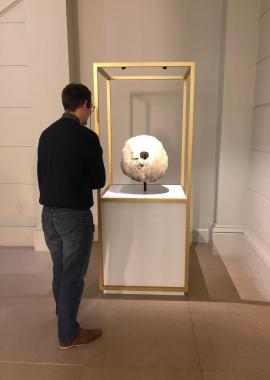 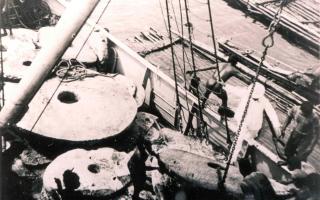 Transporting Yap stones © Museum of the National Bank of Belgium

But how could the value of a stone actually be determined?

Apart from the specific beauty of the rock (aragonite can be found in the composition of pearls) and the history of the stone itself (its age, number of victims though its extraction and transport), its size is also important to assess its value, together with the social status of the parties in the transaction. For instance, stones that had been passed through the hands of important people were more valuable than the stones of common people.

As from 1931, no new stones were cut. Owing to their abnormal size and weight, the stones were gradually replaced, from the beginning of the 20th century, by US dollars, at least for small, daily transactions. However, large purchases (like houses and land) are still occasionally paid for with aragonite stones. They are also used today to pay damages.

Equally remarkable is the way in which in the past (and still today for large purchases) transactions were made on Yap. When a stone passed from one owner to the other, it was most of the time not even moved. The stones simply remained in their original place on the island: by the roadside, outside a house, or any other building.

Theft of a rai is a rare thing as the islanders mutually keep them under constant social supervision. Most of the inhabitants of Yap know who owns the stones and have great respect for other people’s property. Besides, how do you steal a 6-tonne stone without anyone noticing? 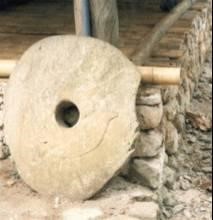