The National Bank of Belgium was founded by the Law of 5 May 1850 in the form of a public limited company. It therefore obtained a monopoly over the issue of banknotes that had previously been shared with the private banks. The two biggest banking institutions, the Société Générale and the Bank of Belgium, jointly subscribed to the National Bank’s start-up capital. The first paper shares date from 1851 and all carry the nominal value of 1 000 francs, a similar amount to that of other major companies from Belgium. Among all its shareholders, the National Bank could count on one of the most famous French authors, no less than Victor Hugo. During his exile in Brussels, he took advantage of the situation to convert part of his literary earnings into shares in the National Bank. While today it is still possible to become a shareholder as a private individual, the Belgian State has owned half of the NBB’s shares since 1948.

The National Bank of Belgium was established in the form of a public limited company on 4 September 1850 after its Statutes and the Law of 5 May 1850 were voted through. This was a difficult birth. Effectively, it has also been necessary to bring the two main banks of the fledgling Kingdom of Belgium, namely the Société Générale and the Bank of Belgium, to give up their right of issue to confer this privilege on the new National Bank.

After long-drawn-out negotiations, the Minister of Finance at the time, Walthère Frère-Orban, found a solution by concluding agreements with the two banking establishments effectively reserving subscription to the National Bank’s capital for them. In this way, out of the National Bank’s 25 million of capital, 15 million was attributed to the Bank of Belgium and 10 million to the Société Générale.

The National Bank was thus able to open its counters on 2 January 1851 and start production of its first banknotes. The Bank’s first share dates from the same year. Its nominal value was one thousand francs. This value was chosen because it matched the Banque de France’s shares and did not exceed that of most of the shares issued by major companies in Belgium. These shares were particularly attractive because the guaranteed a minimum dividend. 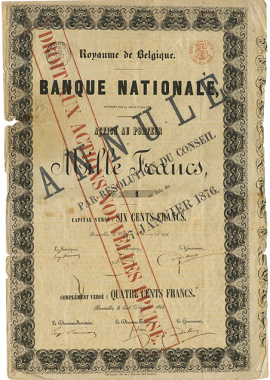 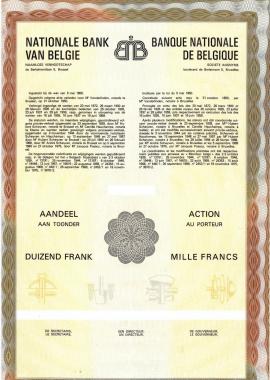 By 1854, the volume of banknotes in circulation exceeded 100 million, while the Parliament had been banking on issuing 45 million. It thus became clear that the centralisation of the right of Belgian banknote issue encouraged banknote circulation. Thanks to the wide prosperity that Belgium was enjoying in the second half of the 19th century, thanks to the support of an issuing central bank, the number of banks expanded sharply and their operations took on considerable proportions.

Although it is a public limited company, the National Bank of Belgium’s main objective is not to deliver shareholder value. It is above all an institution that essentially provides services of general interest. It therefore has a very specific legal status, organs and rules of procedure.

In the 19th century, one of the most biggest shareholders was the French author Victor Hugo, who was in exile in Brussels at the time. As early as 1851, the poet bought 168 shares. On the back of his literary success, he acquired more and more share until he owned 600 of them in 1872, making him the National Bank’s second biggest shareholder. Since 1948, the Belgian State has owned half of its shares. The other half is still shared by the public. While today it is still possible to buy shares in the Bank, it is no longer necessary to bother with all these papers. The last paper version of NBB shares dates from the 1980s. Since 1 January 2008, no more paper shares have been put into circulation in Belgium after they went digital.