The National Bank of Belgium’s main building located on the boulevard de Berlaimont is both grand and very austere. That was the goal of its architect, Marcel Van Goethem, who designed this 200-metre-long edifice. The building was constructed after the Second World War. It is an example of modernism, as evidenced by the monumental colonnade that shapes the façade. It gave the complex a secure and robust character, an aspect to which Van Goethem was very attentive. For instance, the building has only one main entrance, protected by iron railings. Van Goethem’s modernist style was in stark contrast to the original building that architect Henri Beyaert erected in the second half of the 19th century. This new project emerged because the old building no longer met the requirements of a modern central bank. The lack of space, as well as the underground railway junction between Brussels North and Brussels South encouraged the option for construction of a new building. The Hôtel du Gouverneur designed by Beyaert was integrated into the new complex.

Marcel Van Goethem was born in Brussels on 7 June 1900. He began his studies at the Brussels Académie des Beaux-Arts (Centre for Fine Arts), before leaving for France, where he continued his training at the Paris École des Beaux-Arts. He emerged with a diploma at the age of 25. Upon his return to Belgium, he worked for many years as an associate alongside architect Alexis Dumont with whom he designed various buildings, both public and private. Noteworthy among these are the offices of Royal Dutch Shell (1934) and Assurances Générales de Trieste (1936), both located on rue Ravenstein in Brussels.

On top of his job as an architect, Van Goethem also devoted some of his time to teaching. He was a professor of architecture at the Saint-Josse École de Dessin from 1929, before taking over as the Principal from 1937 to 1945. He was also a member of the examination panel for the Brussels Académie royale des Beaux-Arts. A few years later, in 1948, he became a fellow at the Université Libre de Bruxelles in the Faculty of Applied Sciences.

In the early stages of the Second World War, on 1 February 1940, Marcel Van Goethem was appointed as the National Bank of Belgium's architect. He was entrusted with the design of the new main building of the institution. This project began because the existing buildings had become too cramped to meet the needs of the central bank and the construction of the rail link between Brussels North and South stations offered possibilities for extension. Many office blocks in the neighbourhood were expropriated and the Bank seized the opportunity not only to build new offices, but also a new Printing Works. 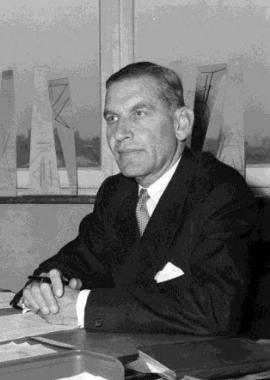 Work did not start until 1946, after the Second World War. The construction process did not go according to plan. The big differences in level, with part of the plot under shifting sand and the tunnel serving the North-South junction caused a lot of problems. The noise and vibrations from North-South junction therefore threw up a genuine challenge in terms of insulation of the building.

While the 1940 plans foresaw the destruction of all the original buildings, including the Hôtel du Gouverneur, in 1948, a few enlightened minds pleaded in favour of keeping the Hôtel. And they won through, as you can see on the model of the current building that is now in the Museum. Built in an eclectic style, the Hôtel served as the official residence of the Governor and formal reception area until 1957.

As part of his project, Van Goethem made several study trips to England, Switzerland, Scandinavia and the United States. He gave the building all sorts of technical improvements, such as the aluminium guillotine panel windows, the mobile partitions, the high-speed lifts with automatic doors and even the air conditioning and fluorescent lighting built into the ceilings.

The first stone was laid on 20 January 1948 and construction work lasted for more than ten years. That in itself was an amazing feat considering that the best part of the new buildings went up on the site of the old structure that has now been almost entirely demolished. Furthermore, the Bank did not stop work for one single day over the entire period.

The characteristic feature of this monumental work of art is its clear structure. It has tall and slender stone pillars adorning the front façade. As was the case with some of his other productions, Van Goethem worked closely with engineers to ensure the stability of these columns in the face of wind pressure. Aesthetically speaking, these pillars look a bit like railings enclosing the building while still letting the light in. 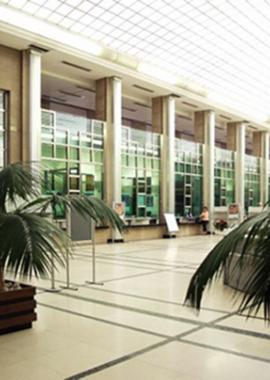 The security of the premises was at the heart of all requirements. It is for this reason that, despite the sheer size of the construction, the building has only one single entrance for the public and has railings running round it. It was in the same perspective that the decision was taken to split the Bank's administration away from the banknote Printing Works: the two blocks are located on opposite sides of the boulevard de Berlaimont but are linked by a 32-metre-long underground passage.

On the ornamental side of things, the front of the building housing the administration is adorned by three aluminium figures set above the public entrance. These méreaux, raised symbols depicting various different occupations, were produced by the same artist, namely Marcel Rau, and decorated the north and south rotundas. Each end of the façade is marked by the two huge sculptures of women. Sitting Woman on the south side is the work of Georges Grard, while the Kneeling Girl at the north end was created by Charles Leplae.

However, Marcel Van Goethem's career did not at the National Bank of Belgium. In 1953, he became assistant to Paul Bonduelle, chief architect of Expo '58, the Brussels World Fair in 1958. He took over from him in 1955 and was thus the man behind the architectural organisation of this major exhibition. Van Goethem wanted architects from participating countries to be able to use this universal exhibition as the world's biggest-ever "test lab". He did not put his name to any one production, but instead endeavoured to coordinate efforts as best as possible and tried to understand the problems faced by everyone. He thus made it possible for 500 architects, engineers and decorators to work in ideal conditions.

At the same time, in 1957, Van Goethem had also been involved in drawing up the plans for the Royal Mint’s new building. The idea was to erect the building near the National Bank. The choice came down to a site on the Boulevard de Pachéco. As architectural uniformity between the two buildings was also sought, Van Goethem was entrusted with the project. However, for financial reasons, his plans could not be fully carried out.

Marcel Van Goethem was not just a lecturer at the ULB. He was also the man masterminding the plans and the construction work on new university buildings like the grand Paul-Emile Janson hall inaugurated in 1958, which seats no less than 1 500 people. 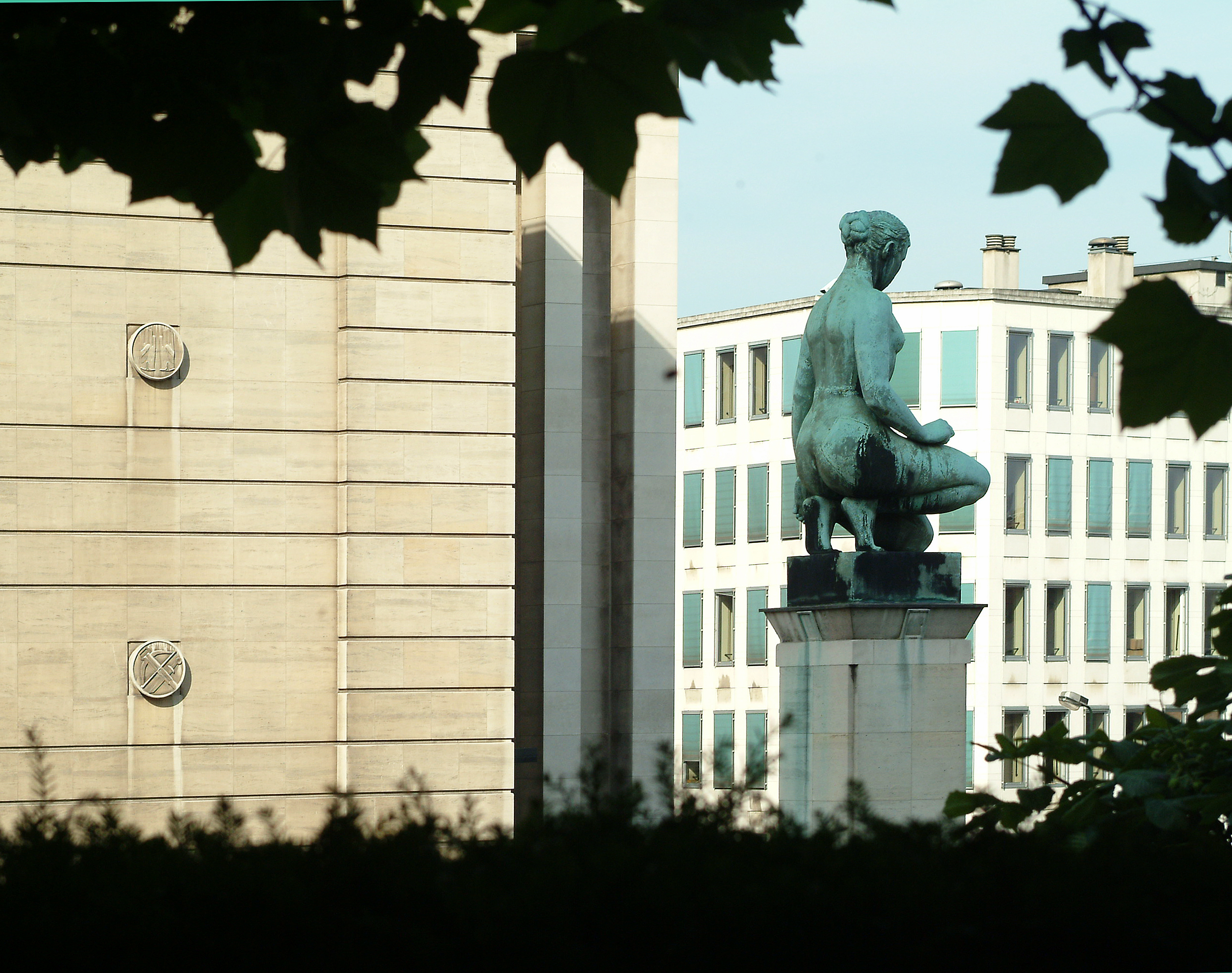 Young girl kneeling, by Charles Leplat © Museum of the National Bank of Belgium