The last series of banknotes issued in Belgian francs, which were put into circulation between 1994 and 1998, is devoted to famous Belgian personalities whose work had strongly influenced the development of the arts over the last century. Can you identify them? The characters portrayed are James Ensor, Adolphe Sax, René Magritte, Constant Permeke and Victor Horta. Each of the denominations features typical elements referring to their artistic work and their contribution to Belgian and international culture. Each banknote from this series has effective security features that enable their authenticity to be checked; the relief of certain zones, the security thread, the watermark, the motifs in variable colours are all elements taken up and adapted to our euro banknotes today. This series of banknotes has two innovations. The first one is the appearance of the value in German. The second innovation is that denominations of 200 and 2 000 francs were put into circulation. With this change, Belgium adjusted to European habits and facilitated the transition to the euro for its population (200 Belgian francs are more or less equivalent to 5 euros and 2 000 francs to 50 euros).

In 2002, Belgium was one of the twelve countries that introduced the euro banknotes and coins. With their arrival, the familiar Belgian francs disappeared permanently from our wallets after 170 years. This article focuses on the last series of Belgian franc banknotes. Although some Belgian people still convert prices into francs, the notes themselves seem to have been forgotten already.

The last series of banknotes was put into circulation between the years 1994 and 1998. The National Bank had become used to depicting realistic portraits of famous Belgians on its earlier series of notes. Because this required meticulous elaboration, the notes were made more difficult to forge and, moreover, they highlighted the cultural wealth of the country. Like previous series, this last series once again featured Belgian personalities. This time, the honour was reserved for artists whose work had strongly influenced the 20th century. Among those selected were painter James Ensor, musical instrument maker Adolphe Sax, the artist René Magritte, painter-sculptor Constant Permeke and architect Victor Horta. The 10 000 BEF note bears the portrait of the royal couple. The designs were made by draughtsmen and engravers from the National Bank’s Printing Works. The words draughtsman and engraver were always mentioned on the note, followed by “inv.” (draughtsman) and “sculp.” (engraver). 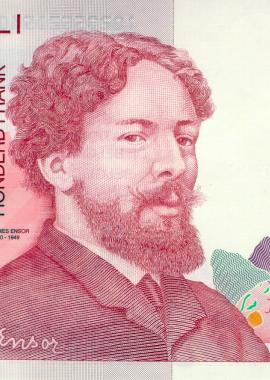 The last series of Belgian franc notes dates back to 1992, with the re-introduction after 48 years of a 10 000-franc note. This note was dedicated to King Baudouin and Queen Fabiola and depicted their portrait as well as the parliamentary hemicycle on the front. The back shows the Royal Greenhouses of Laeken. Technically speaking, this note was already the forerunner of the last series. Effectively, many different security features were introduced at the time, such as optically variable ink and the security thread, which are still protecting our euro against counterfeiting today.

This 10 000-franc note meant the end of the 5 000-franc denomination, which disappeared in 1994, when the 2 000-franc note, the first of the new series, was introduced. It was Victor Horta who was given the honour of becoming the face of this brand-new denomination. As he was a prominent Art Nouveau architect, the note was designed in this style, too. The typical elements refer to his total works of art, such as the Solvay House in Brussels and Villa Carpentier in Renaix. One year later, the 100-franc note was put into circulation. This note broke with the tradition of banknotes having to be illustrations of sobriety, virtuousness and diligence. This banknote is actually devoted to the symbolist painter James Ensor, who is widely known for his satirical and critical view of reality. The note features clear references to Ensor's native town Ostend, his love of the sea and his works of art. In 1996, the National Bank again came up with a bold new banknote, by putting the 200 BEF note into circulation, with the image of the inventor of the saxophone, Adolphe Sax. This banknote, too, highlights Sax's accomplishments and his native town Dinant. The Sax note was unique both in terms of colour and value. 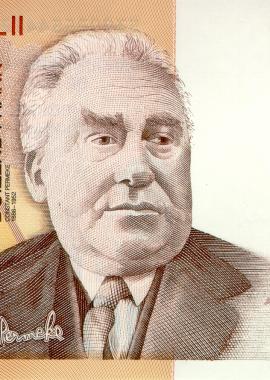 As the introduction of the euro was gradually taking shape and the date was drawing closer, the National Bank decided to put the last series into circulation sooner than planned. So, in 1997, two new banknotes appeared: 1 000 francs and 10 000 francs. The portrait of Constant Permeke features on the 1 000-franc note. This artist was one of the most important figures of the Flemish expressionist school. Again, the pictures on the note clearly refer to the portrayed artist's life and works.

Although the previous 10 000-franc note only dated from 1992, the National Bank nevertheless chose to replace it. Thus, in 1997, banknotes appeared bearing the portrait of the new royal couple, King Albert II and Queen Paola. Finally, one year later, the last banknote of the series was put into circulation. It was dedicated to the surrealist painter René Magritte. Just as with earlier banknotes, there are again references to the artist's works. The surrealist elements are therefore clearly depicted, and like many of the painter's works, the banknote evokes a confusing dimension. The door between the two images on the front not only refers to Magritte's works, it also adds another dimension. For instance, the door between the two images on the front of the note not only refer to Magritte’s work, but also seem to have an extra dimension: the door to the Belgian franc was soon to be locked and that of the euro opened. The keyhole in the lower right-hand corner constitutes the see-through register on the note. Thus, the technique perfectly fits the banknote's aesthetics. 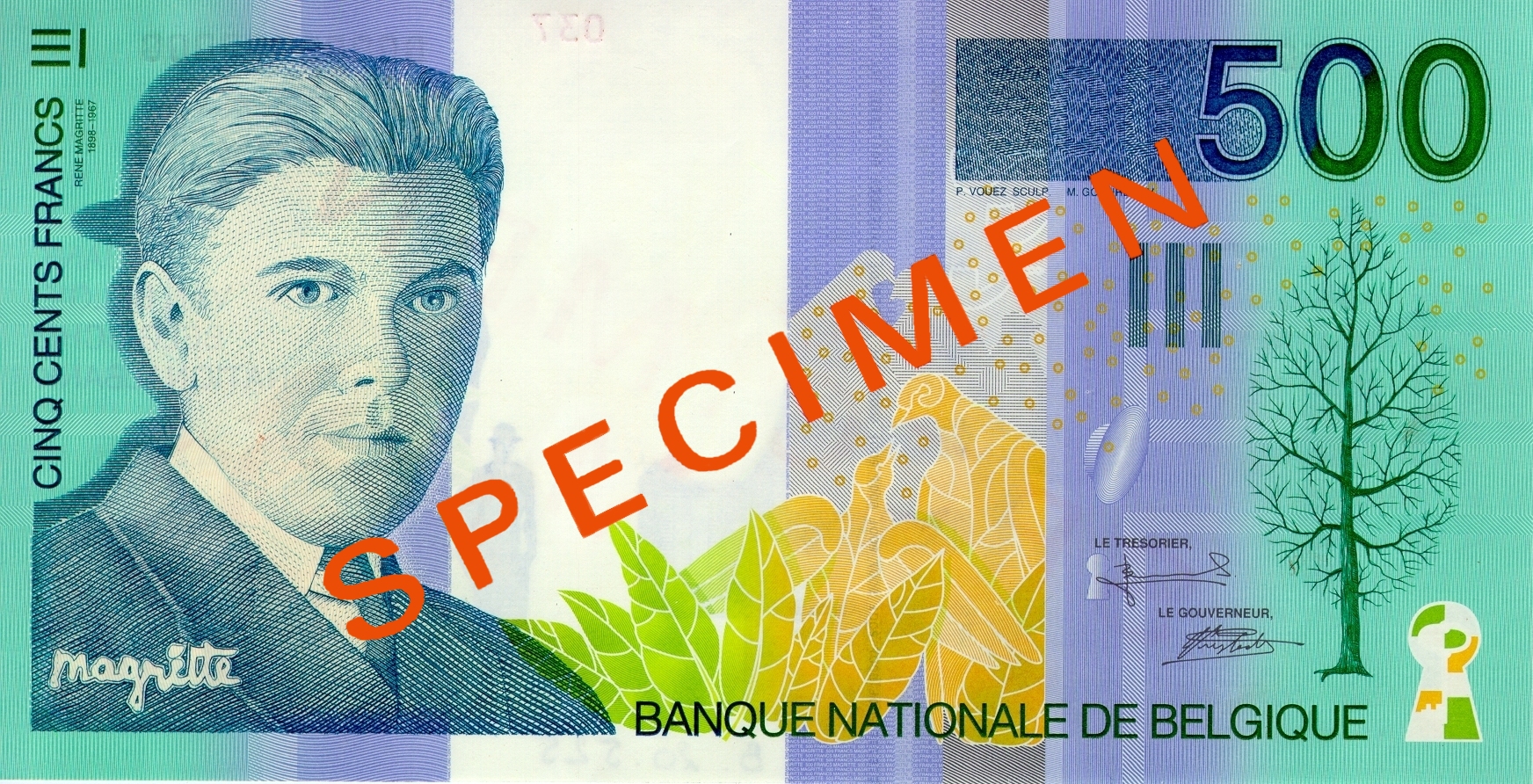 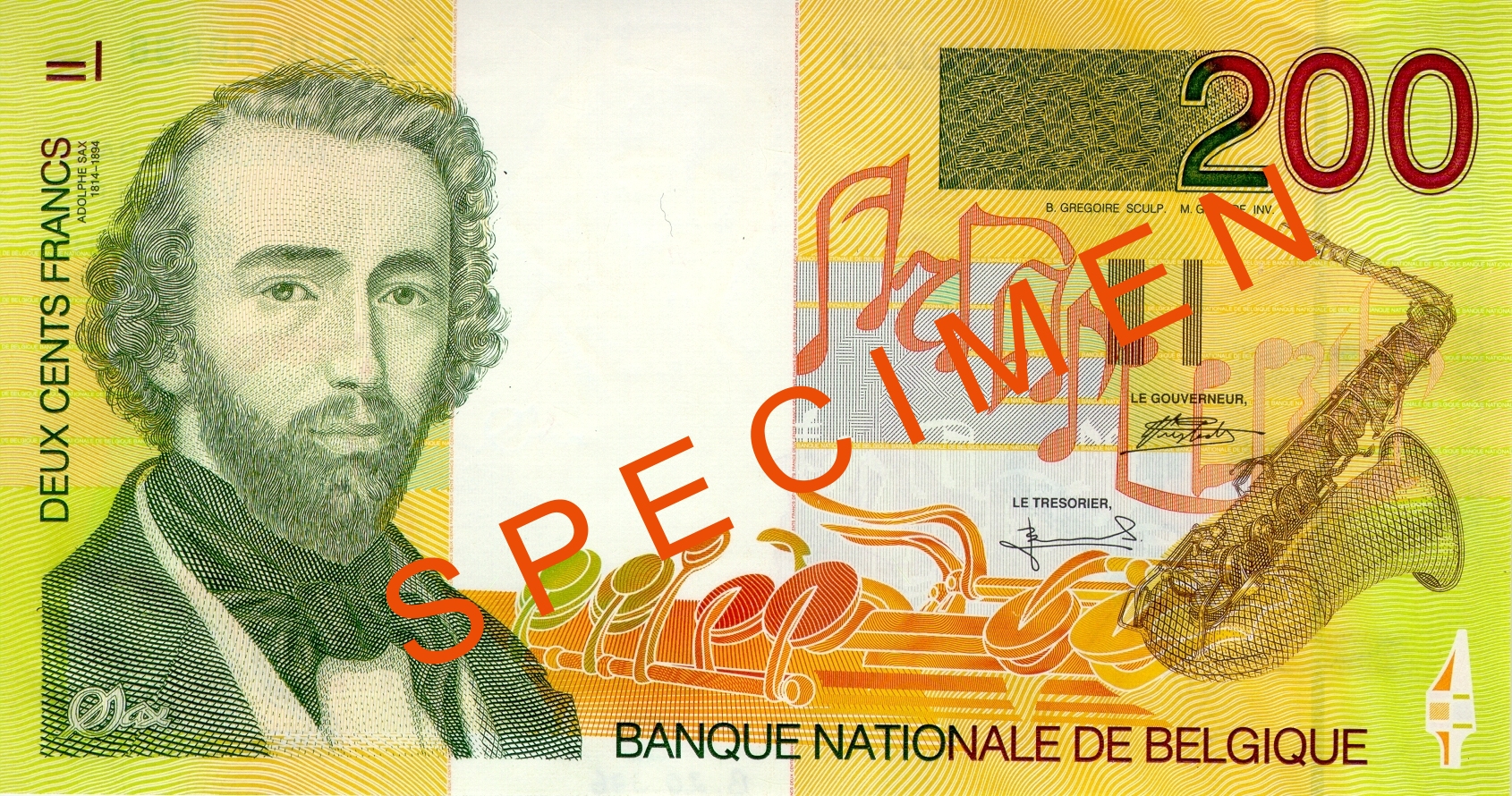 This series of banknotes displays a number of remarkable innovations. To start with, the note's value is also mentioned in German for the first time. The front of the note always indicates the value in the mother tongue of the portrayed artist. On the reverse, the value is stated in the other official national language, as well as in German from now on.

A second innovation has been mentioned before. For the first time, denominations of 200 and 2 000 francs were put into circulation. There were two reasons to do so. On the one hand, there was demand from the financial sector for a banknote that could be distributed via cash dispensers. The 2 000 BEF note met this demand. On the other hand, the Belgian banknotes were thus in accordance with European habits, as most countries were using a 1-2-5 series. This also made for an easier transition to the euro, as 200 Belgian francs are more or less equivalent to 5 euros and 2 000 francs to 50 euros. These new denominations also offered a new method of banknote identification to the visually impaired. From now on, the tangible bars in the left-hand corner indicated the value. The vertical bars represented the hundreds, thousands or tens of thousands ('I'' = 00, 'II' = 000, 'III' = 0000), while the horizontal bars multiplied the vertical ones by 1, 2 or 5 ('-' is 1, '=' is 2, '=' is 5).

Although these banknotes are no longer in circulation, there are still many of them in the possession of the general public. A little over 15 million banknotes have not yet been returned to the National Bank, some 10 million of which are 100-franc notes (figures as at 31/12/2020). These can still be exchanged at the National Bank, with no time limit. Who knows, a stack of James Ensor banknotes might turn up as a real treasure during spring cleaning!