At the National Bank of Belgium’s Museum, several “inflationary notes” are showcased. For example, a German Reichsbank note dating from 1923 that is worth no less than 200 billion Deutsche Marks. Even though one might have the impression that only billiionaires can pay with banknotes like these, in reality they are virtually worthless. At the time, the Weimar Republic in Germany was going through a period of hyperinflation. Inflation means a general and lasting an increase in the prices of goods and services. When a general rise in prices increase really takes off and gets out of control, this is called hyperinflation. Historical examples like the Weimar Republic in Germany, and Zimbabwe and Venezuela show that hyperinflation goes hand in hand with economic instability. So, it is hardly surprising that the main objective of the European Central Bank is to guarantee the purchasing power of the euro by ensuring price stability in the euro area. When prices rise too fast, your purchasing power is reduced. Or, in other words, your euros are losing value, so that your trust in the euro also drops and this situation is bad for the economy. But make no mistake! Price stability does not mean that there are no price rises at all. The economy has to be able to grow continuously. This is why the objective is to let prices rise by 2 % each year.

In November 1923, a loaf of bread changed hands for 140 billion Marks in Germany. This hyperinflation shook the social order to its core. Suddenly, the German people’s savings were worthless. In January 2009, a note of 100,000 billion Zimbabwean dollars was issued in Zimbabwe, the counter value of barely 230 euro on the black market. Despite being millionaire or billionaire almost. In June 2009, for instance, 95 % of the Zimbabweans had no official job. Even though almost everyone was a ‘‘millionaire’’ or ‘‘billionaire’’, the whole population faced very high unemployment and huge poverty. An even more recent example of hyperinflation is Venezuela, where the economy is largely dependent on oil revenue. As oil prices had dropped so sharply at a point, the national currency, the bolivar, had lost a lot of its value over the last few years. For instance, in June 2018, a cup of coffee cost one million bolivars, or roughly one-fifth of the minimum monthly wage. So, for a cup of coffee, you had to have 10 000 100-bolivar notes, the most widely used banknote, while in 2016, the same cup of coffee only cost 450 bolivars. 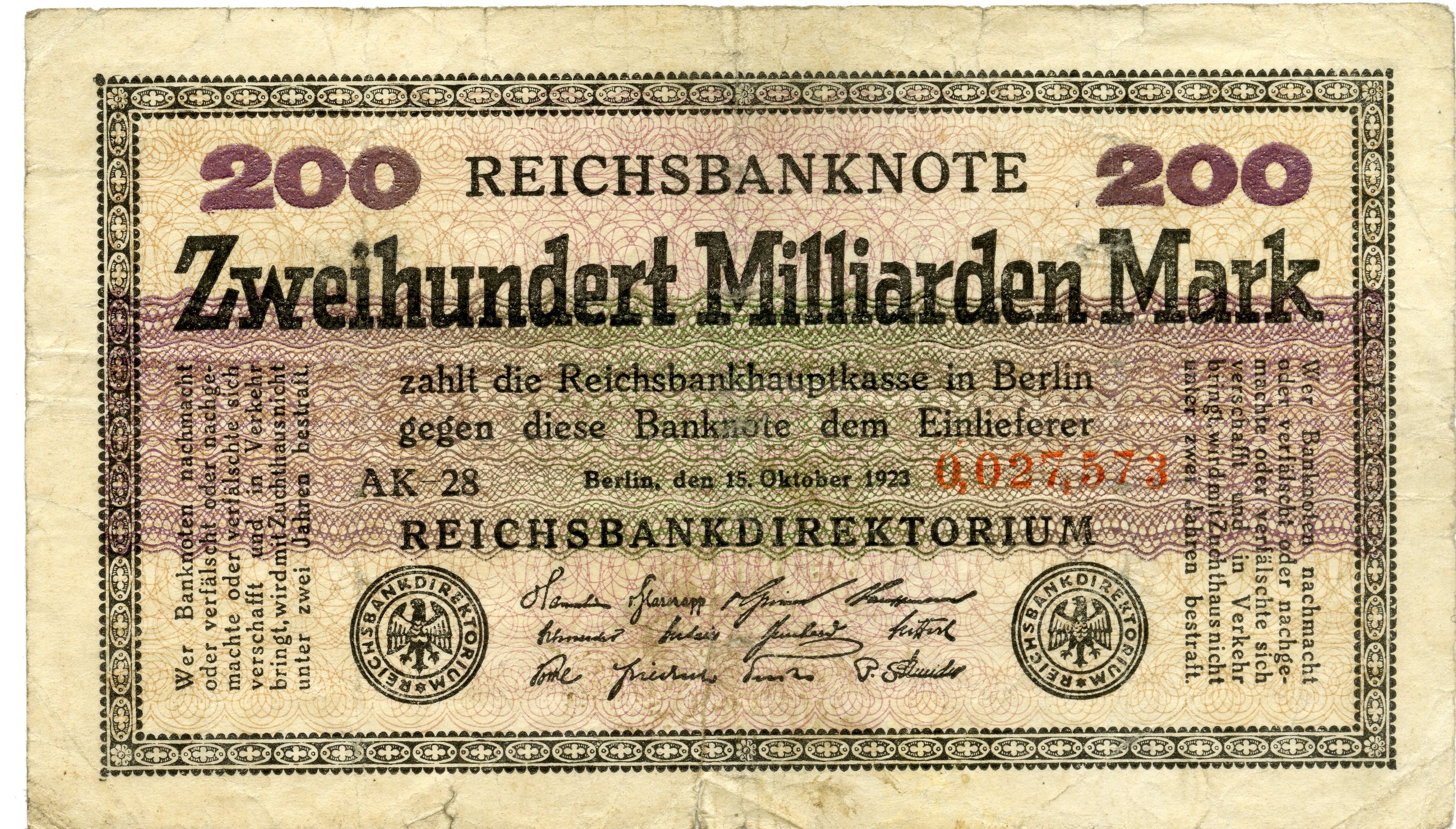 To have a better understanding of this situation, let us take a closer look at the concepts of inflation and especially hyperinflation. Inflation refers to the rate at which prices are rising on average in the economy. A low inflation rate means that prices increase slowly; high inflation implies that prices are rising rapidly. When prices rise more than wages and salaries, the purchasing power of money declines and your money is worth. Price rises may result from different factors, such as more expensive raw materials (cost inflation), demand exceeding supply (demand inflation) or an excessively high money supply. Price rises are no problem in themselves. In the euro area, the target is an annual rise in the harmonised consumer price index by 2 %. Slight price rises are considered to be favourable for the economy, as consumers are encouraged to buy goods. Putting off buying effectively means that consumers will have to pay (a bit) more for the same product later. Price rises only become problematic when the rates of increase get too high. This is what happens in periods of hyperinflation. In such a situation, prices rise from day to day. At the height of the German hyperinflation in 1923, prices even rose by the hour.  Workers were paid twice a day so they could spend their morning salary as quickly as possible on goods which would cost twice as much by the end of the day. Austrian author Stefan Zweig summed up this dramatic situation very appropriately: ‘‘I knew days when I paid 50 000 marks for a newspaper in the morning and 100 000 in the evening (….). You found 100 000 Mark notes in the gutter: a beggar had thrown them away with contempt; a shoeshine boy cost more than a shoe had cost before’’.

High inflation, and by extension hyperinflation, are always associated with instability. As it is impossible to tell how far prices will rise, companies have the greatest difficulty in making any long-term forecasts and are averse to the idea of making any major investment. In such circumstances, any money saved can also lose its value from one day to the next, leading to extreme discontent. More often than not, hyperinflation is linked with a run on the bank by savers to withdraw their savings in order to invest them abroad or in real estate. The longer inflation persists, the more banknotes are needed to pay for things and the more prices rise. Even the smallest purchase requires large sums of money. In Zimbabwe, banknotes were no longer kept in wallets, but in rucksacks, and in Weimar Germany they even used wheelbarrows!

The exact causes of hyperinflation vary from one case to another, but a disrupted economy is always one of the main factors, alongside and too much money in circulation. The combination of both elements inevitably leads to staggering price rises. As long as the government does not take any financial consolidation measures and continues to issue money, prices will keep soaring.

In Zimbabwe (2006-2009), prices of goods and services multiplied by 150 million in just a year. The hyperinflation was only halted at the beginning of 2009, when the US dollar was introduced as the official currency and the Zimbabwean dollar disappeared. In the space of a few months, inflation, which had reached several million per cent, reversed to turn negative, or in other words, it mutated into deflation of …. 3 %! 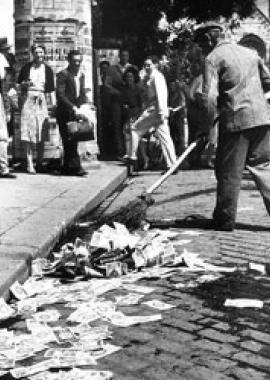 Cleaners sweep up piles of Hungarian pengo notes, which were worthless following the 1946 currency reform. © Museum of the National Bank of Belgium