Founded in 1657, Stockholms Banco, the future central bank of Sweden, wrote a chapter in the history of the means of payment and banking. This bank is the first one to have issued banknotes in the modern sense. Unlike the paper money that had been issued up until then, the printed documents made no reference to a depositor, to a deposit or to any interest whatsoever. It is to the Swedish banker Johan Palmstruch, founder of Stockholms Banco, and also to the rich bellicose past of Sweden that these new credit notes are attributable. The Thirty Years’ War (1618-1648), as well as the wars with Poland and Denmark had left the country riddled with debt and triggered a rapid devaluation of the kopparplätmynt or copper plate. Palmstruch very quickly saw paper money as a better alternative to these heavy copper plates, which had been used in Sweden as a means of payment since 1644. Moreover, in 1660, copper lost 17 % of its value against silver dalers, and therefore the new plates weighed a lot less than the old ones. In a bid to prevent clients from making a run on the bank to reclaim their plates to resell them at the price of the metal, the bank was authorised to issue credit notes or kreditivsedlar. In Belgium, it was not until 1837 that the first banknotes appeared.

In 1654, Christina, the young Swedish queen, caused upheaval when she abdicated on the grounds of religious belief. Her extravagant lifestyle and the Thirty Years’ War (1618-1648) had bled the country dry financially and public finances had gone down the drain. Her nephew and successor, Charles X Gustav, continued to empty the coffers in waging a costly war against Poland and Denmark.

These recurring wars absolutely dismantled the Swedish economy, while triggering the depreciation of its currency, the kopparplätmynt or copper plate. This currency, that had been in circulation since 1644, may well be considered to be unique, not least because of its size. A plate with a value of 10 daler silver coins measured 30 by 70 cm and had a weight of almost 20 kg. So, the situation was not very bright when, on 30 November 1656, Johan Palmstruch received the royal privilege to found a bank in Sweden.

Born in Riga in 1611, Johan Palmstruch was still very young when he moved to Amsterdam, where he ended up in jail in 1639 for insolvency, as his creditors feared he might flee the country without paying his debts. Palmstruch nevertheless gave another version of the story by claiming loud and clear that he had enough money to settle his accounts. The truth is that he had undoubtedly been involved in economic espionage because later on in his career he often cited the Bank of Amsterdam as example.

Palmstruch founded Stockholms Banco and started up his business activities in 1657. In principle, it was a private bank, but through various measures taken by the government, it de facto had the status of a public institution. For instance, half of the profits accrued to the State, while all customs and excise duties were to be paid through the intermediary of the bank. Consequently, the bank became closely involved in the administration of public finances. While business seemed to be going well to start with, it later emerged that the accounts were not well kept, that there was a permanent cash shortage and that loans in the form of credit notes (kreditsvedlar) had been granted a bit to liberally. 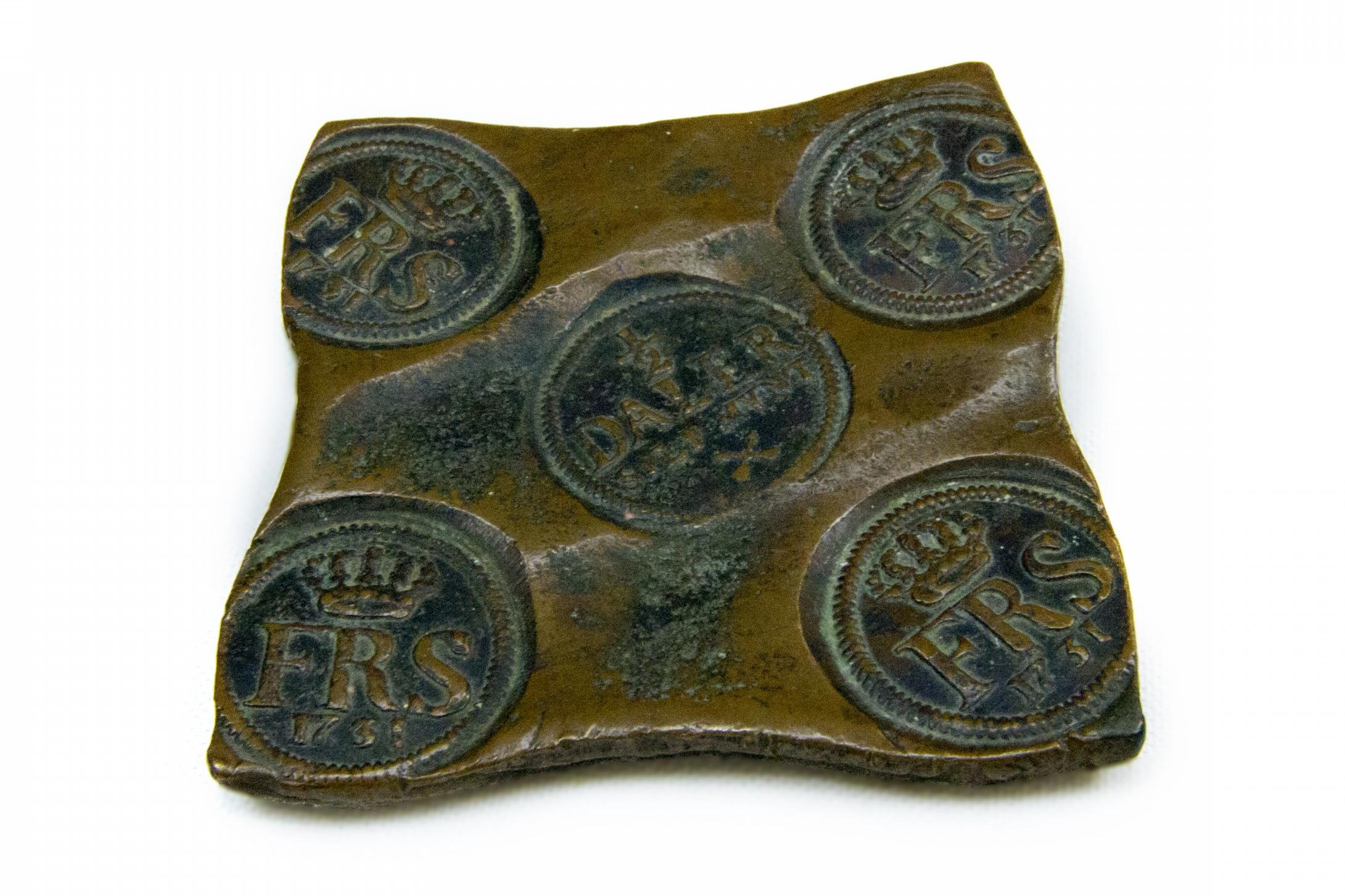 Kopparplätmynt or copper sheet © Museum of the National Bank of Belgium

Because the large and heavy copper plates were extremely unwieldy to say the least, paper currency had already found its way to Sweden. These were not real banknotes, but interest-free certificates of deposit. Part of the copper plate money had been deposited by Stockholms Banco customers in its vaults in exchange for paper money. In 1660, copper lost 17 % of its value against silver dalers. The new plates weighed a lot less than the old ones. The bank’s customers reclaimed their old plates to resell them at the price of the metal. Sensing that his bank was going to be without assets, Palmstruch requested authorisation to issue credit notes or kreditivsedlar. A draft Royal Decree made the notes legal tender, stipulated that they should not to be issued to anyone who did not hold cash deposits in the bank and defined four distinct monetary units: ducats, riksdalers, silver dalers and copper dalers, with denominations ranging from 100 to 1 000.

The fact that the notes could be partly handwritten gave them a major practical advantage becauseno less than 76 different denominations were provided: 19 per currency. During the debate on this draft Royal Decree, the idea of legal tender had been abandoned. The banknotes were circulating freely with no obligation but… the tax collector was obliged to accept the notes as a means of payment. The authorities therefore effectively regarded these notes as a legal means of payment. And since the bank granted loans in the form of credit notes, one observed, in practice, that notes were also issued to persons other than depositors with the bank.

The first notes were issued in daler copper coinage and daler silver coinage in 1661 but not a single copy survived. Between 1662 and 1664, several different series were issued but the best- known notes, the so-called Palmstruchers, date from 1666.

To make these notes, a thick, white handmade paper inscribed with the word "BANCO" as watermark was used. One of the decorated sides featured the text printed in black ink, the signatures and the seals. The specimen displayed in the Museum also dates from this year, as shown by the words "An 1666, 30 January". The first three digits of the date are printed, the rest is handwritten just like the series number of the note. Apart from the personal seals of the signers, the seal of the Stockholms Banco appears in three different formats on the note: twice between the signatures and once in front of the number. On the back of the note, there is a handwritten number as well as a signature. Wafers of paper are attached to the back of the impressions to give the note extra strength. The notes were put into circulation in envelopes.

The issue of these kreditivsedlar gave Johan Palmstruch a place in the history of the means of payment and banking. Although paper money had been issued long before, his notes may be considered as banknotes in the modern sense of the term: printed documents mentioning a round denomination and without specifying a depositor, a deposit or any interest demand. The notes were payable on demand. Possession of such a document was sufficient to constitute a claim against the bank. Lastly, these notes were guaranted by an institution having the status of a central bank. Belgium had to wait until 1837 for the Société Générale to decide to issue its first notes denominated in Belgian francs, in favour of the industrial boom. 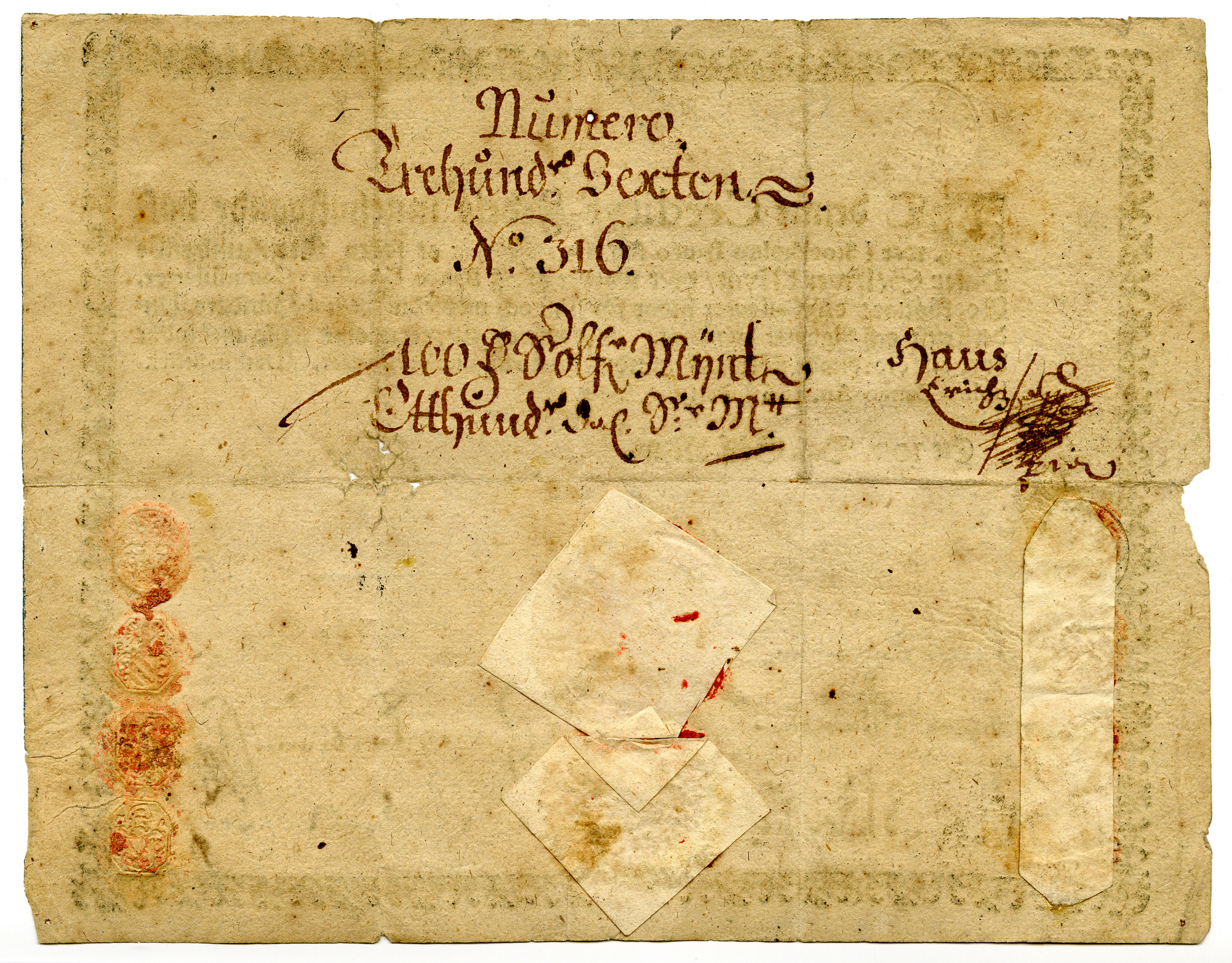