The National Bank of Belgium was founded by the Law of 5 May 1850. In 1851, it issued its first banknotes. After the economic crises of 1838 and 1848, the people’s trust in banknotes had to be regained. The 1 000-franc note from 1851 was the biggest denomination in the first series of banknotes issued by the National Bank. The relatively small number of copies can be partly explained by the high value of the note. If we take account of purchasing power, a banknote like this would be worth almost 300 000 francs, or more than 7 000 euros these days! When it is compared with later series, what is striking is that the note refers exclusively to the Kingdom of Belgium. Moreover, the three signatures that it bears share a striking feature. They were applied by hand on each banknote. As a security feature, they guaranteed that the notes were payable on demand. The illustrations come from the hand of Léopold Wiener, a well-known medallist and engraver of coins. He decorated the note with allegorical figures like cherubs and figures drawn from Greek-Roman iconography, which symbolised the qualities of the fledgling Belgian nation. These banknotes portrayed the image the nation intended to paint of itself.

Nowadays, the National Bank is the only bank in Belgium that can print banknotes. However, this has not always been the case. Between 1830 and 1850, several banks (Société Générale, Banque de Belgique, Banque Liégeoise and Caisse d’Épargnes and the Bank of Flanders) printed banknotes to lend to their clientele of entrepreneurs. During the 1848 economic crisis, a great many banks found themselves in difficulty. It soon became clear that it would be better to entrust a single institution with banknote printing. It is for this reason that the National Bank was founded on 5 May 1850, on the initiative of the Finance Minister Hubert-Frère Orban. From then on, it was the only Belgian bank to be authorised to issue banknotes. The new bank opened its doors on 2 January 1851. On the very same day, a first series of banknotes was put into circulation. 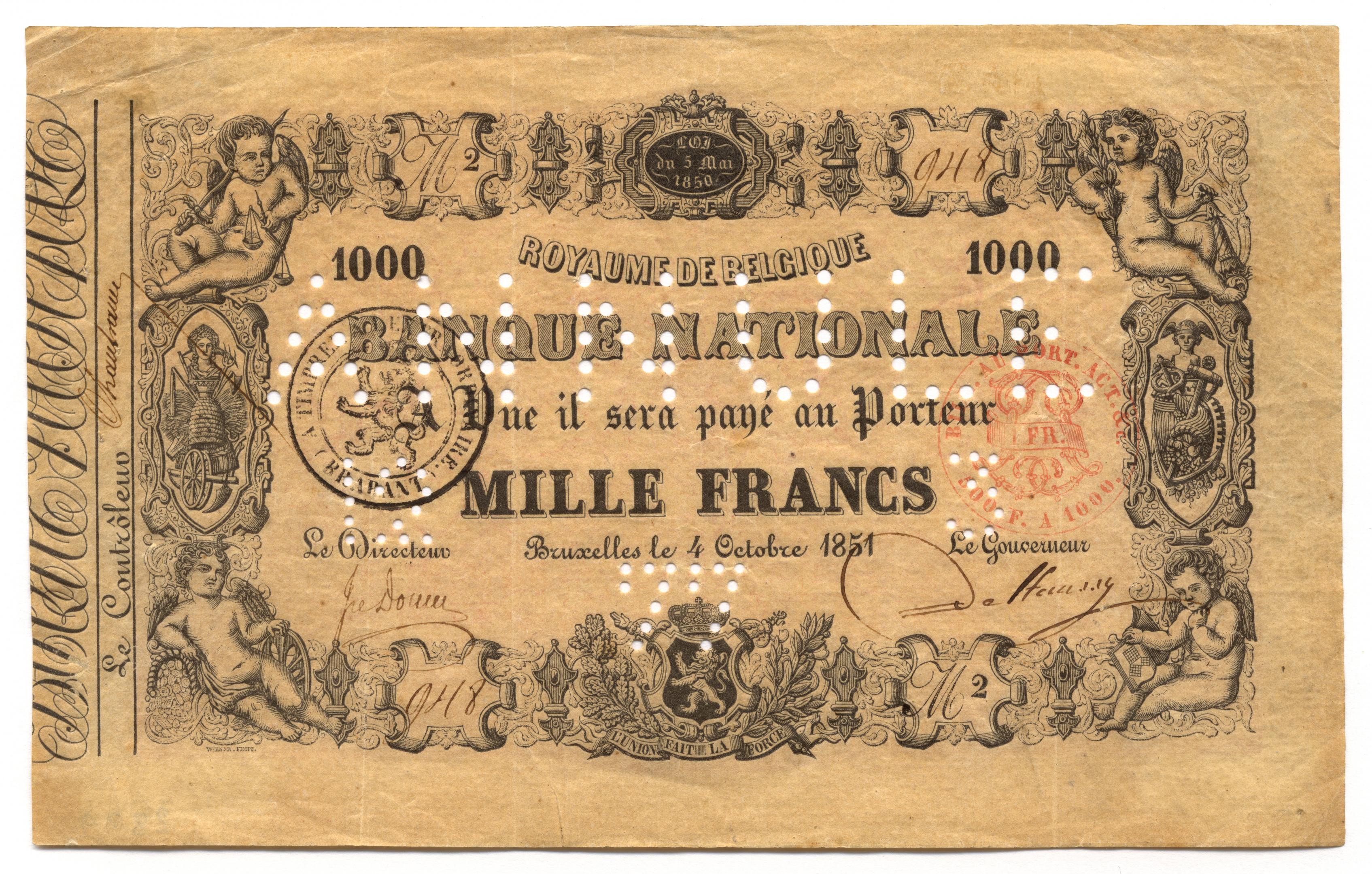 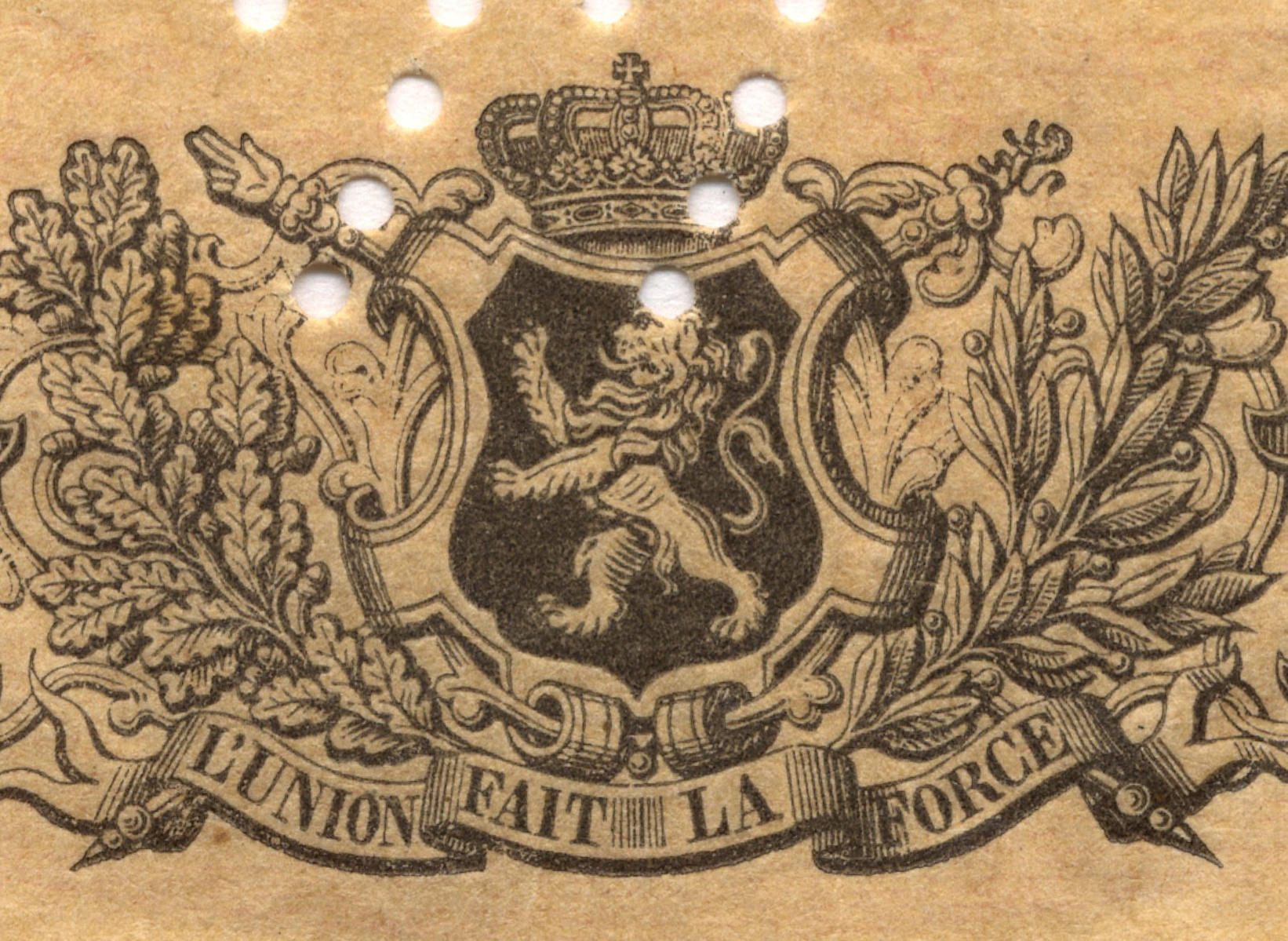 It is important to note that, up until 1873, Belgian banknotes were not actually legal tender. So, nobody was obliged to accept them and a creditor had the right to demand repayment in coins of the realm. In order to gain the public’s trust, the quality of the materials used was of utmost importance. That is why a resistant form of banknote papier was chosen. It not only extended the life of the banknotes, but it also enabled the paper manufacturers to take measures against counterfeiting. The National Bank turned to the De Meurs paper mill in Rhode-Saint-Genèse near Brussels, where the paper used was handmade, from gelatine-glued rags. Each sheet was exclusively destined for just one banknote.

The banknote was almost entirely covered in writing, with illustrations only around the edge. The value of the note, the identity of the issuer, the mention payable on demand, the date and the number took precedence over the image. The resemblance between the banknote and other paper securities is striking. Unlike most other banknotes issued before, the 1851 series explicitly mentions "Royaume de Belgique" (Kingdom of Belgium). Reference to the young nation is further reinforced by the coat of arms and its national motto: "L'Union fait la force" (Union is strength).  The Belgian lion is also predominant on a royal crowned shield. It is set on two crossed sceptres, the left-hand one decorated with the hand of justice and the one on the right a replica of the lion. The coat of arms is framed with olive and oak branches.

The signature is an essential element on a banknote. It authenticates it and, for years and years, also used to guarantee it as payable on demand. Thus, all Belgian notes had one or more signatures. The 1851-type 1,000-franc note even bears three. First of all, in the bottom right-hand corner, is the Governor's signature (F.-Ph. de Haussy) or the Vice-Governor's in his absence (L. Deswert). The second signature, in the bottom left-hand corner, is that of the Director responsible for the Printing Works (L. Doucet or E. Prévinaire). On the far left, in the decorative border in calligraphy, is the third signature, that of the controller of the Printing Works (Chantraine). In this space, the banknote mentions the words ‘‘National Bank’’. It is only partly legible; the other part, or scroll counterfoil, is left behind in the booklet from which the banknote is torn. This third signature remained necessary as long as banknotes were taken out of such booklets. The controller was responsible for scrupulously monitoring and checking the tearing out of the note from the booklet (the actual issuance). If there was any doubt about a note being genuine, the other part of the corresponding counterfoil was checked for conformity.

In 1869, the security strip was scrapped and the third signature disappeared completely from banknotes. To make the notes even safer, each one was signed and numbered by hand. 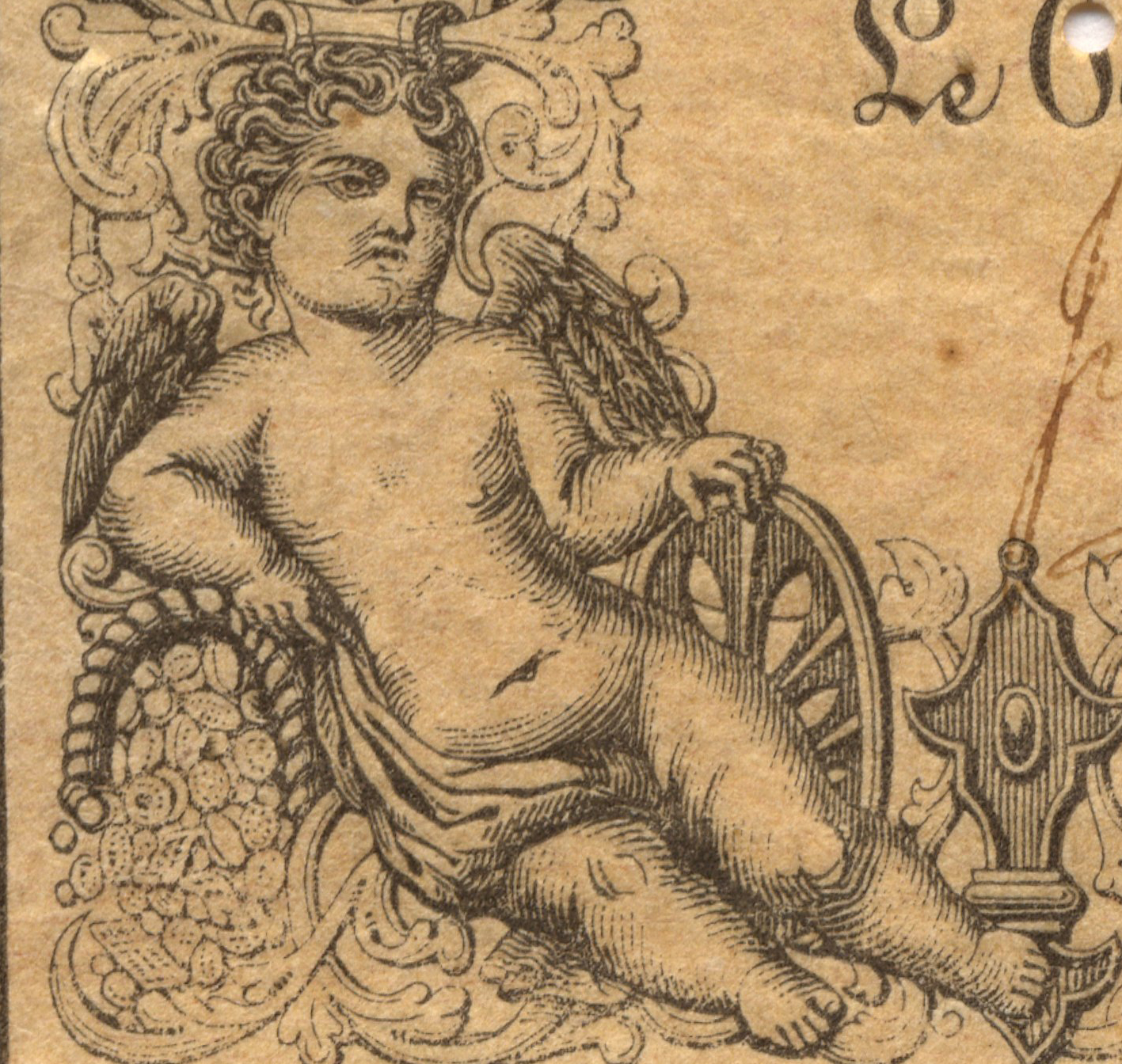 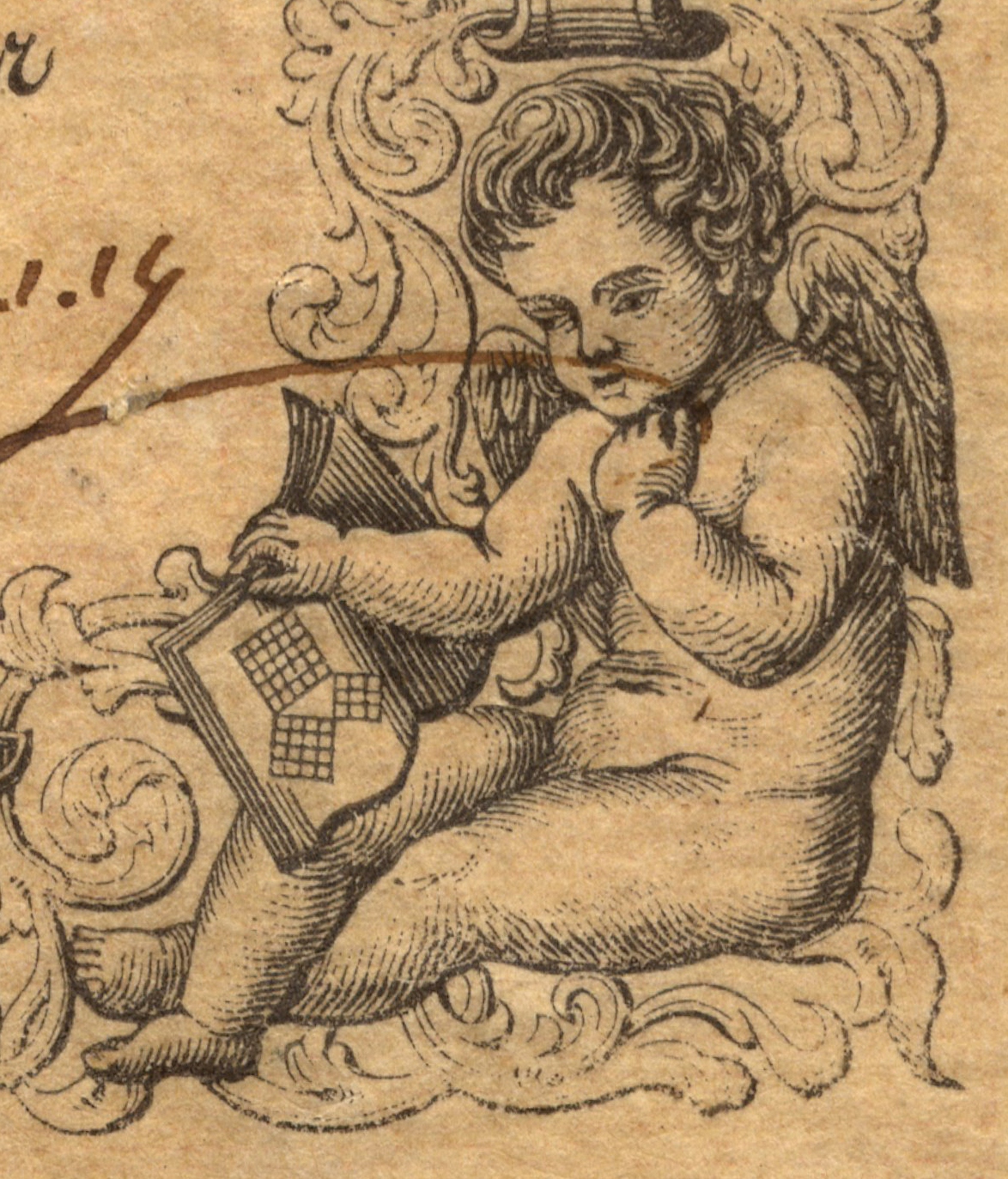 The illustrations on this banknote come from the hand of Léopold Wiener, a well-known medallist and engraver of coins, as the words Wiener fecit indicate. The composition consists of a framework of decorative elements and allegorical figures, including four cherubs. Even though this illustration is relatively poor from a style point of view and limited to the edges, it nevertheless conveys fundamental ideas for the Bank and the Belgian State. The cherub in the bottom left-hand corner rests upon a wheel and a basket full of ripe fruit. These two elements symbolise industry and wealth and emphasise the role of industrial development in the country’s progress and prosperity.

The second cherub is looking through a book with geometrical figures symbolising science and the study of the arts. The third cherub, who is holding an olive branch and a torch, underlines the importance of peace for the country. The last cherub (or putto) is equipped with a sword and weighing scales, which refer to the importance of strict but fair justice. To fill the cartouches on the left- and right-hand edges of the note, Wiener drew inspiration from Greek-Roman iconography. The winged cap and the caduceus of the figure on the right refer to Mercury, the Roman god of commerce and merchants. The other elements he is represented by, such as the cog and the hammer, link him with industry too. The figure on the left refers to Ceres, the Roman goddess of agriculture. She can be recognised by the farm tools such as plough, flail and fork, as well as the sheaves of harvested corn and the beehive.

All these decorative elements point up the economic importance of the agriculture, trade and industry sectors and refer to values like justice, progress, art and science. These banknotes portray the image the nation wanted to paint of itself.

On the front of the banknote, red and black stamps bear witness to the stamp duty the National Bank was obliged to pay when it issued any commercial paper. For notes of 500 and 1000 francs, this duty was fixed at one franc.

The back of the note was identically printed. The only difference from the front is the red background. The theme nevertheless the same: a swarm of cherubs circling around a beehive, symbol of diligence and frugality. These decorative motifs on the background are centred and placed within a horizontally lined border. This vignette was meant to protect the note from forgeries.

Despite all the efforts undertaken to make this series of secure and high-quality notes, the public at large remained reticent. The notes were mainly used for large commercial transactions and discount operations. At the end of 1853, this 1 000-franc note was replaced by another, production of which used blue ink so as to prevent photographic forgery. 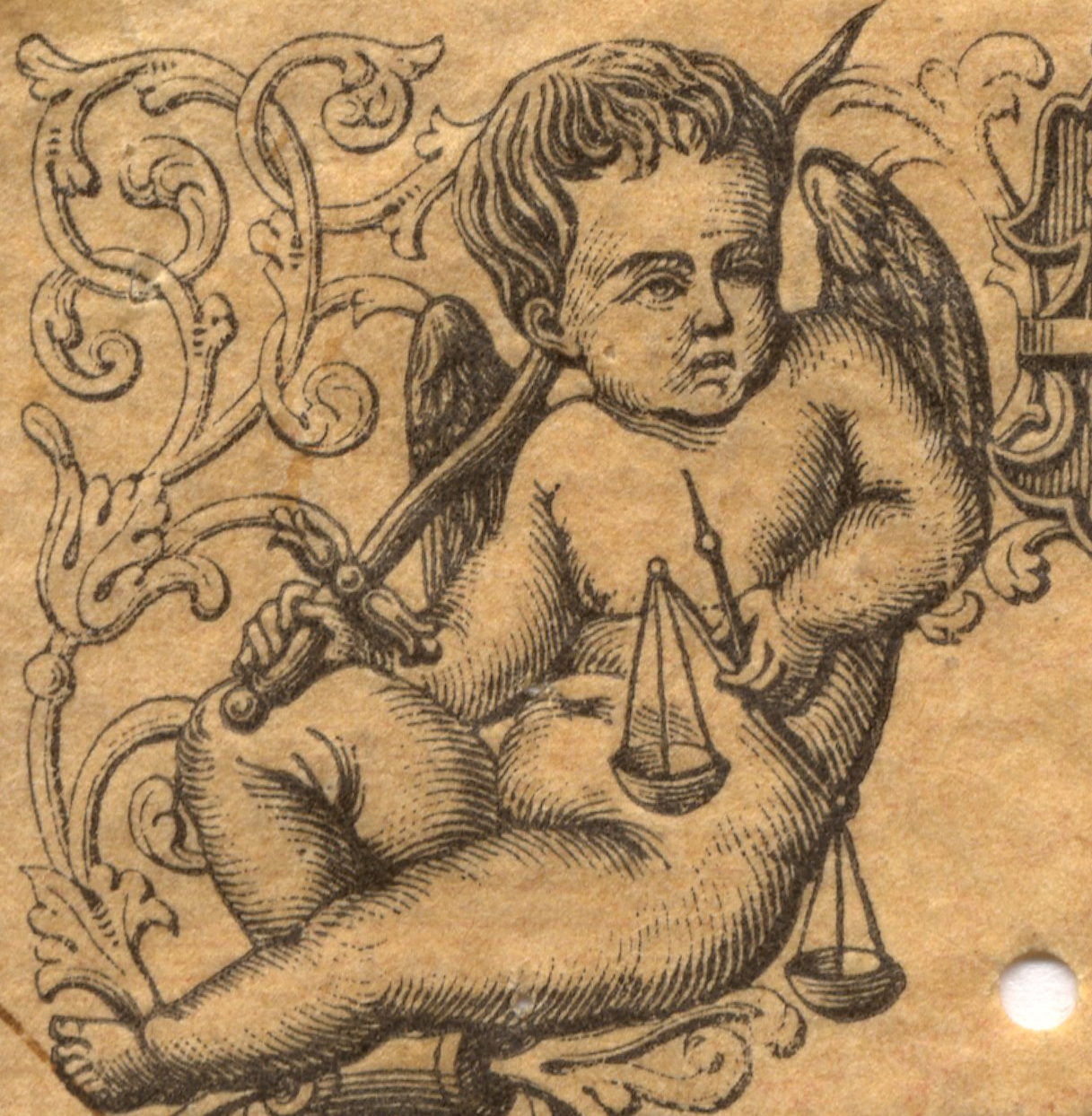 With his scales and his sword, this angel symbolises firm, fair justice © Museum of the National Bank of Belgium